The royal family of England is known around the world. While this ruling family only has a small fraction of the political power that they once had, their fame and influence seems to be at an all-time high. Even though the media frets over what Kate Middleton is wearing and who might Prince Harry marry, this family has used their publicity to shed some light on a much needed cause: Mental Health. 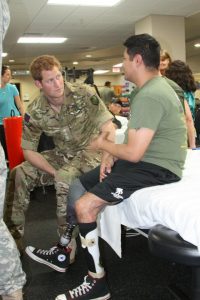 Kate is not alone in her desire to spread mental health awareness; her brother-in-law, Prince Harry, is playing a large part as well. Prince Harry has served two tours of duty in Afghanistan with the British Military. Seeing the horrors and hardships of combat made him become aware of the need to help veterans returning home with Post Traumatic Stress Disorder(PTSD). Since the beginning of his military career he has done many great deeds to aid his fellow veterans who are suffering. He has visited several soldiers affected by PTSD and he has completed the harrowing 1,000 mile Walking with the Wounded last fall to raise awareness for the physical and mental health issues that come with combat. In 2014, inspired by the Warrior Games in the US, Prince Harry brought The Invictus Games to London. This organization arranges several different types of sporting events for veterans to showcase their amazing skills and good sportsmanship. Now this was not a small event. Tens of thousands gathered to watch servicemen and women compete in the same facilities that hosted the 2012 Olympic Games in London. The Invictus Games aren’t just an amazing way to honor servicemen and women but show the game participants that they are truly “unconquerable” which is what Invictus means in Latin. This year, The Invictus Games are coming to Orlando, FL.