Years of research show that cannabidiol (CBD), an active ingredient in marijuana, can treat a variety of conditions including chronic pain, glaucoma, and seizures.

Also, there is evidence that cannabis has chemicals that prevent the spread of cancer and the progression of Alzheimer’s disease.

Even with the rampant decriminalization of cannabis and documentation of its benefits, the ugly side of medical weed should make you think twice before applying for that marijuana patient license.

So, if you are on the fence about whether to add medical marijuana to your chronic pain management arsenal, let’s explore the worst mental health complications that you may be subscribing to. 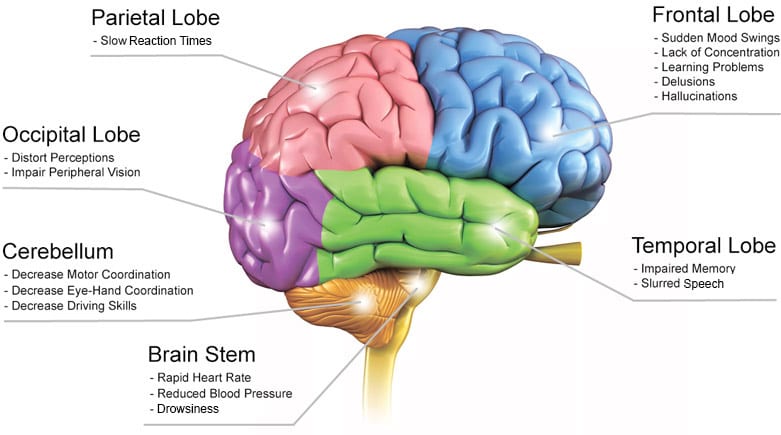 Effects of Marijuana Use on the Brain

A common short-lived side effect of marijuana is short-term memory loss, where the brain is fuzzy on things that happened around 20 minutes earlier.

But recent longitudinal studies now show that early use of cannabis and prolonged usage can lead to long-term memory problems and false memories, too.

Marijuana-induced memory impairment results from the way this drug interacts with the hippocampus, the center of memory, emotions, and the autonomic nervous system in the brain.

A study published in the Hippocampus Journal found that individuals with a history of cannabis use disorder (CUD) have significantly notable differences in the shape of the hippocampus.

Also, these individuals had poorer episodic memory (EM) performance. EM refers to the ability to remember autobiographical events: places, times, associated emotions, and who, what, why, where, and when knowledge.

Generally, the hippocampus loses some of its neurons with age thereby making it hard to learn new information. However, research findings now show that chronic use of weed could aggravate this process.

Chronic cannabis use has also been linked with the development of false memories. In a complex study published in the Journal of Molecular Psychiatry, the researchers found that cannabis users are at a higher risk of suffering from false memories common among the elderly and psychiatric populations.

The link between weed and schizophrenia has been a long-standing and highly debated one. However, researchers from both sides of the divide agree that cannabis has the potential to initiate this mental disorder.

Schizophrenia is a chronic mental illness characterized by hallucinations, delusions, disorganized speech, lack of motivation, difficulties with managing emotions, and problems with thinking and concentration.

While it only affects about 1% of people in the United States, it is regarded as a severe brain disorder, which can last a lifetime and has no definitive cure.

Researchers haven’t found a direct link between marijuana and schizophrenia. But there is enough evidence that early use of cannabis can trigger the symptoms, especially if the user is already predisposed. 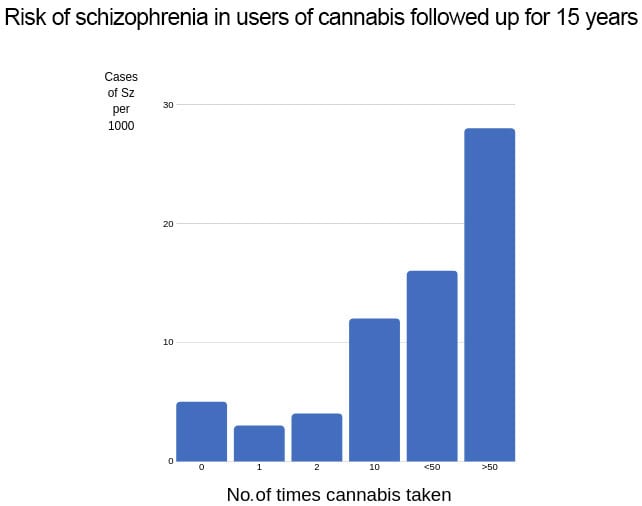 The legalization of medical marijuana may come as a huge relief for many people who live with depression.

At the moment, studies point out the possible benefits of using weed to restore the endocannabinoid system in the brain and stabilize mood.

However, there are speculations that these positive benefits of medical marijuana in the treatment of depression are only short-term. Most studies strongly associate cannabis with depression, especially among young adults.

The most popular study on weed and depression is this study carried out by researchers from McGill University (Canada), Rutgers University (USA), and the University of Oxford (UK).

The basic results of this study were that adolescents who use cannabis have a 37% higher risk of developing depression in their early adulthood compared to non-users.

In addition, cannabis users have a 50% chance of harboring suicidal thoughts. They are also 4 times more likely to make a suicidal attempt in comparison to those who don’t use weed. 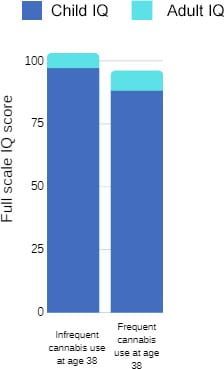 In a study that took 30 years to complete, researchers have concluded that persistent use of cannabis can lead to a permanent decline in IQ.

This was a longitudinal study that involved following and testing the subjects for over 3 decades while noting how and when they indulged in drug abuse.

This study aimed at determining whether there is an association between persistent use of weed and neuropsychological decline. It also sought to determine whether this decline is much more prevalent among adolescent cannabis users as previous studies claimed.

After cleaning and analyzing the study results, it was evident that persistent cannabis use caused a notable decline in IQ.

Precisely, study members who used cannabis had an IQ drop of up to 6 points for both cannabis dependent and persistent regular users.

Importantly, this study also confirmed that this decline in IQ was more prevalent among members who started using cannabis in their adolescence than adult-onset cannabis users.

Another important finding of this study was that the cessation of cannabis use did not lead to the restoration of the lost IQ points.

Marijuana may not be as addictive as other drugs, including cocaine and heroin. But it’s possible to develop an addiction with regular or heavy use, and this can have immense negative impacts on the brain and body.

Cannabis dependence refers to an actual reliance on the drug. Individuals in this stage require weed to function properly and will experience uncomfortable withdrawal symptoms if they don’t use it soon.

Addiction, on the other hand, is chronic and causes uncontrollable and intense cravings. It is also characterized by compulsive consumption of the drug despite the imminent dangers that it has on the user’s life.

The exact statistics of these disorders aren’t clear yet. But the National Institutes on Drug Abuse (NIDA) states that approximately 30% of weed users are very likely to develop a use disorder. Of these, it adds that 9% are at the risk of developing an addiction.

Although the risk of developing a weed addiction is significantly much lower compared to other drugs, the effects are not any less dangerous.

Marijuana addiction can lead to:

The good news is that one can quit marijuana use even after dependence and addiction. Unfortunately, the process of detoxing isn’t a piece of cake.

Quitting heavy use of marijuana may cause a notoriously volatile reaction that causes immense discomforts and even pain, psychologically and physically.

Author Bio: Holly Klamer is a content writer at THC Detox. She enjoys writing on various topics mainly associated with health. Her famous articles are on the topic of marijuana, edibles, CBD, cannabis, etc.

Photo by Sharon McCutcheon on Unsplash