This article is co-written by Jay Boll, RtoR’s Editor-in-Chief and Veronique Hoebeke, RtoR’s Associate Editor. Both of them have used their combined knowledge of mental illness, psychology and love of film to come up with 6 of the most popular movies that get both the science and the realities of mental illness wrong. 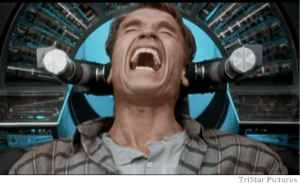 This retro thriller generally has nothing to do with mental illness but it does get one part ridiculously wrong. When Arnold’s character goes to get pleasant memories implanted in his brain, something goes wrong: he suddenly wakes up in a rage and now knows advanced combat and secret-spy skills. The doctors on-site call this a “Schizo Embolism”. But the thing is a “Schizo Embolism” is just movie-talk mumbo-jumbo. An embolism is where a blood vessel gets blocked but there is no “Schizo” part of the brain for this embolism to occur in. So even if the character has an embolism in his brain, a change in personality (and the ability to dodge bullets Matrix-style) would not be the likely result. Plus, this stems from a misconception that the prefix “Schizo” from the word “schizophrenia” means having multiple personalities which is simply not true about the disorder. It looks like the filmmakers wanted to give the audience the impression of some scary medical condition that can instantly change your personality when in reality no such thing exists. 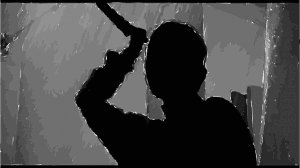 Alfred Hitchcock’s masterpiece spawned an entire genre of slasher movies featuring emotionally disturbed and violent killers, including such horror classics as Halloween and The Texas Chainsaw Massacre. What made the original so shocking and terrifying to audiences of that era, when hairy wolfmen, suave vampires and bug-eyed aliens were the staples of scary movies, is that this monster looked like he could live next door.  The unusual approach to the telling of this story and Anthony Perkins’ sensitive, nuanced portrayal of the cross-dressing hotel owner Norman Bates allow the audience to glimpse the humanity inside the killer.  But Hitchcock knew that he would never get MPAA approval without a concession to the censors.  So he added a scene at the end where a smug psychiatrist explains Norman’s behavior in terms of “modern science” and psychology.  According to this pompous windbag (played with irony by the character actor Simon Oakland), “Norman” didn’t kill Janet Leigh’s character in the famous shower scene.  The “pathologically jealous … mother-half of Norman’s mind” committed the murders.  In other words, it’s the mother’s fault!  Dr. Richman then goes on to propound the famous “split personality” trope that we will see in countless slasher films to follow:  “When the mind houses two personalities, there is always a battle.  In Norman’s case, the battle is over and the dominant personality has won.”  If that wasn’t bad enough, this movie also introduced the word “psycho” into the popular vocabulary, contributing greatly to the stigma that surrounds real-world mental health disorders.

This movie is one of my personal favorites and it is seen by many as one of the best feel-good movies ever made. Thankfully, the dysfunction of the characters and the toll mental illness takes on their families is not sugar-coated by the filmmakers but Silver Linings Playbook is rather unrealistic about how to treat and manage a mental illness. In the real world, bipolar disorder can’t be cured away with any amount of book-throwing, football-game-betting, dance-competition-rehearsing and Jennifer-Lawrence-loving. The reason this movie isn’t further down on this list is due to the fact the director had the best of intentions when creating this movie. Director David O. Russel told an interviewer associated with NAMI that “I want people to come out feeling that it was a good movie. Part of that is feeling less afraid of talking about and dealing with and being warm and human about mental illness challenges—and wanting to do more.” The movie takes on society’s preconceived notions about mental illness, therapy and medication by having the main characters challenge those who stick to an old-school script regarding those issues. The over-emphasis on having a romantic relationship as a cure for your mental health issues is where the RomCom-Dramedy gets it wrong.  The ending of the movie makes it seem like all of the mental health problems that two main characters have instantly washed away because they are now in a relationship. 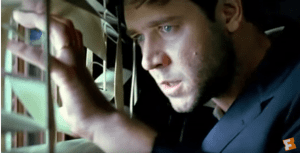 This biopic about the Nobel Prize-winning economist John Nash, tells the story of a mathematical genius who peaks early, and is sidelined by schizophrenia and institutionalized, only to make a startling recovery and come back to achieve the highest honors of his profession.  A Beautiful Mind won 4 Academy Awards, including the Oscar for Best Picture, and it may have done more than any other popular movie to combat stigma and draw attention to the positive contributions of people with serious mental health disorders.  So why is it on a list of movies that get it wrong?  The reason is Nash’s roommate Charles, who draws him into a complicated Soviet espionage plot involving his young niece and some shady secret agents.  This subplot adds excitement to what is essentially the life story of a socially isolated mathematician.  The only problem is that it all takes place in Nash’s head, as the audience discovers late in the story.  Hollywood loves twists, and mental illness is one of its favorite plot devices for spinning a story in a new direction.  But people with schizophrenia don’t normally have visual hallucinations where they see the human players in their delusions represented before them.  And they certainly don’t get driven around in cars by them, like we see the hallucinatory Charles doing in one scene (think about it). 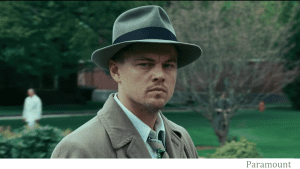 This movie, set shortly after World War II, involves another government conspiracy: this one about secret medical experiments conducted on patients at a high-security mental hospital for the “criminally insane.”  Director Martin Scorsese delivers lots of drama, suspense, and creepy atmospherics in this psychological thriller about a federal marshal investigating the disappearance of a female patient.  He also serves up the gamut of mental illness stereotypes, with enough twists to fill a Chubby Checker album.  I won’t try to summarize the plot, which is so complicated it poses a threat to anyone’s mental health.  I’ll just spoil the surprise ending so you don’t have to watch the movie: the federal marshal who exposes the plot is actually a patient who slipped into psychosis after failing to protect his children from their homicidal mother.  This ending manages to hit the trifecta of mental illness movie clichés: murderous mom, trauma-induced split personality, and the big reveal that ‘it was all a madman’s imaginings’ – a variation of the ‘it was only a dream’ trope that hasn’t been done well since Dorothy woke up in her own bed in Kansas more than 75 years ago. 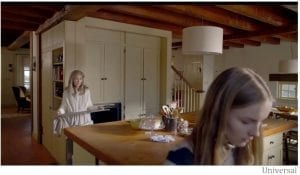 In this movie, mental illness is just used as a trope to scare teen audiences without a hint of accuracy. The filmmakers didn’t take into account the cognitive impairments that come with severe psychiatric illnesses. While it might be a terrifying cinematic thrill to be trapped in the middle of nowhere with escaped patients from a psychiatric hospital, the chances that they could pull off a murderous scheme is unlikely. Quite frankly, there is a lot to say about this movie that I couldn’t fit here. Read more about what The Visit got wrong about mental illness.

Tell us what you think about the list. Did we leave a movie out that you think got mental illness wrong? Let us know in the comments below!

4 thoughts on “6 Popular Movies that Got Mental Illness Wrong”