Robert Graves in his poem “Recalling War” reflects on the experience of war in human memory.  The poem was written twenty years after the end of World War I, in which Graves served as an officer in the Royal Welch Fusiliers.  In the opening lines, he could be describing a typical Memorial Day as most of us experience it.  War has “assumed the nature-look of time” and old soldiers have adjusted to their wounds and artificial limbs.The poem’s opening suggests that twenty years after the conclusion of the war, most of the world has adjusted and moved on.  But for the narrator who asks “What, then, was war?” the memories still seem fresh and are as real as the “ache of wounds beyond all surgeoning.”

When Graves writes of “The inward scream, the duty to run mad,” he seems to refer to a condition we now identify as Post-Traumatic Stress Disorder (PTSD), but which was then known as shell shock or “neurasthenia.”

Fear made fine bed-fellows.  Sick with delight
At life’s discovered transitoriness,
Our youth became all-flesh and waived the mind.

At the battle of Somme, Robert Graves took a shell fragment through the lung which was so severe that official reports announced him prematurely dead.  However, the worst wound was to his mind, as described in his famous World War I memoir, Goodbye to All That…

Since 1916, the fear of gas obsessed me: any unusual smell, even a sudden strong smell of flowers in a garden, was enough to send me trembling. And I couldn’t face the sound of heavy shelling now; the noise of a car back-firing would send me flat on my face, or running for cover.”

In this passage, Graves describes how a sense perception, such as the smell of flowers, could start him trembling with fear or the back-firing of a car could send him running for cover, as if he were reliving his experiences on the battlefield.  We might be tempted to call the flowers and back-firing car triggers for his bad memories about the war.  But it is not quite as simple as that. 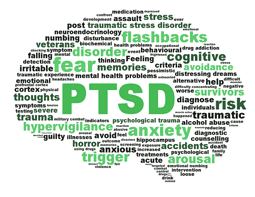 Neuroscientists speculate that high stress events can lead to the suppression of the hippocampus, a region of the brain where memories are processed.  One theory is that when a person with PTSD experiences a stimulus that is similar to the traumatizing event, he or she perceives the event as occurring anew because it was not correctly recorded in the person’s long-term memory.   In this theory, bad memories are not the problem.  Rather it is improperly formed memories that cause the flashbacks that people with PTSD experience.

Robert Graves seems to have intuitively understood the difference between bad memories and improperly formed memories when he changed the original title of his poem from “Remembering War” to “Recalling War.”  This subtle title change signals that the poem’s narrator (presumably Graves himself), is not just looking back at war as a distant memory.  He “recalls” the traumatizing events of war as if he were reliving them.   This is one of the distinguishing characteristics of PTSD, which Graves described poetically decades before it became a clinical designation.

Robert Graves survived the traumas of war and PTSD to become the highly prolific and successful author of The White Goddess, I, Claudius, and many other books.  During the war he befriended fellow “war poets” Wilfred Owen (who died in the last week of the war) and Siegfried Sassoon.  If you are looking for a way to honor our war dead this Memorial Day Weekend, as well as those who lost a part of themselves to war, you might take a moment in between the cookouts and the ball games to read some poems by these great solider-poets whose aesthetic sensibility and trauma were equally formed by World War I.

Here is a link to the complete version of Robert Graves’ short poem “Recalling War”.