Both men and women enjoy drinking for a variety of reasons—to celebrate an event, to socialize with others, or calm down after a long day. Regardless of its benefits, alcohol can still cause dependence in both men and women. Yet, the stereotype of the alcoholic is usually pictured as a middle-aged man who would prefer to spend hours at the local watering hole than be at home with his wife and kids. Now, that stereotype is being turned on its head. Young women, ages 18-35, are not only out-drinking previous generations of women, they are overtaking men in alcohol consumption (telegraph). The rate of drinking in young women has risen so sharply due to misinformation around alcohol and the way our culture is starting to normalize binge drinking habits in women.

Within the last two decades, women’s alcohol consumption has spiked with white women drinking the most. College binge drinking in women has doubled over the last twenty years (helpguide) and deaths due to alcohol in women have also doubled since the 1990’s (nwdailynews). This issue is not only affecting Americans as similar trends in binge drinking among young women have been reported in Canada, Great Britain, and some parts of Europe.

What is causing women to drink more? A combination of misinformation, advertising, and advancements in women’s rights has contributed to normalizing excessive drinking in women. Many people don’t know what binge drinking is, how much alcohol is in certain beverages, and what alcoholism really looks like. On top of that, society still labels alcoholism as a man’s disease which may turn off women from recognizing that they need help.

For women, binge drinking is defined as having more than 6 units of alcohol in a short period of time usually in less than two hours (telegraph).  A single glass of wine and a single bottle of beer have 2.3 units of alcohol. A shot of hard liquor has about 1 unit of alcohol. It’s easy for someone to think that if she isn’t taking shots at a night club that she can’t be binge drinking. Yet, a few glasses of wine at home can also count as bingeing.

If someone is unclear about what binge drinking is, she also may be unaware of the signs of an alcohol use problem. If she constantly worries about where her next drink is coming from and plans her day around her alcohol use, then she may be developing alcohol dependence. Other signs include struggling to limit herself to just one drink, craving alcohol throughout the day, and experiencing sweating, nausea, or shaking if she does not consume alcohol.

It’s important to know that women’s biological composition makes them more vulnerable to the effects of alcohol. Women have less of the critical enzymes needed to break down alcohol, making the effects of drinking quicker and more potent. Women also tend to have more body fat than men which stores alcohol in the body longer. A woman’s monthly cycle can also change how alcohol affects her. All of this means that if women are drinking the same as men, the results could be more dangerous for them. 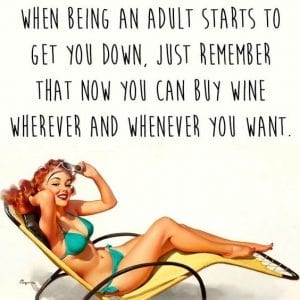 Misinformation is a huge part of the problem, but so is normalizing, glamorizing, or even joking about excessive drinking. Much like the advertisements for Virginia Slims in the 1970’s, consuming alcohol is being advertised as a right women have gained (nwdailynews). Drinking regularly is marketed as something cool, young, and fully-liberated women do. While the progress of gender equality has led to many great things, more women dying of alcohol poisoning is not one of them.

Excessive drinking may be dangerous, but the culture around women’s alcohol use takes a blasé attitude towards the topic. In fact, many social media memes and novelty items marketed towards women praise alcohol as the only way to handle adult responsibilities. Some wine glasses are being sold with phrases “This is how I adult” on them. There are even wine glass sippy cups designed for spill-free covert drinking. 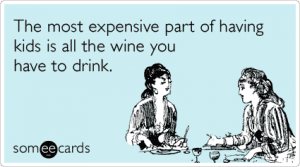 With the oldest millennial women becoming mothers, alcohol is being used as “mommy’s little helper.” When the stresses and pressures of motherhood are piled on, more and more young mothers are turning to daily “wine o’clock” rituals to blow off steam from their hectic lives. Such daily drinking habits may seem like harmless fun at first, but soon can become a much larger problem.

While many studies are being conducted to look into the rise in women’s consumption of alcohol, no one is noticing the correlation substance use has with mental health issues. Women are twice as likely to experience anxiety, depression, and the harmful effects of stress than men (ADAA, stress.org). With modern demands for a thrilling career and a picture-perfect home life, it’s no surprise that women are feeling stressed out. Advertisements and social media memes may try to normalize it, but excessive drinking is almost always a sign of an underlying problem.

What can be done? Be mindful of your drinking habits and your attitude towards alcohol. Don’t joke about or dismiss excessive drinking as if it is no big deal. Be sure to talk to your loved ones about what responsible drinking and binge drinking looks like. Take note of the drinking habits of those around you, so you can be on the lookout for a loved one who might be struggling with alcohol use. If you notice a young woman (or anyone) in your life is showing signs of alcohol dependence, don’t hesitate to get help.

If you are concerned that you or someone you care about is experiencing symptoms of a mental health issue or alcohol dependence, it is important to seek help from a qualified professional. Our Resource Specialist can help you find expert mental health and substance use resources to recover in your community. Contact us now for more information on this free service to our users.