There are many great songs from the musical West Side Story, but my favorite has always been the brilliantly satirical “Gee, Officer Krupke.”  In this number, the Jets’ leader Riff plays a troubled youth who is passed between experts eager to judge what is wrong with him.  In the hand-off between psychiatrist and social worker he is labelled as either “psychologic’ly disturbed” with “neurosis that oughta be curbed” or “sociologic’ly sick” with a “social disease,” depending on the practitioner’s discipline.  In the end, the experts can’t agree and he is passed on to the unsympathetic beat cop Officer Krupke because “deep down inside him, he’s no good.”

Although West Side Story deals with delinquent teens in the 1950s, the parallels with today’s treatment of people who experience problems of mental health are disappointingly familiar. Are mental health problems diseases, disorders, social problems, illnesses or just the result of plain bad character?   Today’s society and the professions intended to help such people cannot seem to decide any better than the experts in the 50s world of Sharks vs Jets.

This debate in mental health is something I have wondered about for years.  How do we characterize the problems of people who come to us for help and what is our approach to helping them?  Putting aside the question of whether or not mental illness is a disease, how do we identify and label problems, so we can begin to treat them.  At times, I’ve felt tempted to throw my hands up in defeat and declare like the experts on stage “Krupke, we got troubles of our own!” – leaving him to deal with the consequences.

A few weeks ago, I discovered a new take on this old dilemma in psychiatrist Bessel Van der Kolk’s book on trauma, The Body Keeps the Score.  In this groundbreaking book, Van der Kolk redefines our understanding of trauma, describing its impact on the physical and mental health of millions of Americans in one of the biggest public health crises of our times.

His work challenges the dominance of the medical model of psychiatry, which sees mental illness as a disease best treated with medications.  Van der Kolk does not deny the benefits of medication for treating many kinds of mental health disorders.  However, the profession’s reliance on medically approved diagnostic labels for people with problems has several negative consequences.

These labels allow doctors and therapists to bill insurance companies so people can get the help they need.  Unfortunately, they can also cause those same people to be unfairly stigmatized or to believe they have a lifelong sickness that can never be cured.  Early in his book, Dr. Van der Kolk makes the case that the “brain-disease model takes control over people’s fate out of their own hands and puts doctors and insurance companies in charge of fixing their problems.” The disease model approach to mental illness is unfortunate because it ignores four fundamental truths about healing from trauma and the mental health problems it can cause.

In rejecting the disease model of mental illness, Van der Kolk does not deny the role of brain chemistry and genetics.  He merely establishes that there is more to it than that.  There is evidence to suggest that psychotic disorders such as schizophrenia (a potentially disabling condition thought to have a strong genetic component), can be triggered by environmental factors such as childhood abuse, substance use, trauma and stress. (Schäfer & Fisher)

is not disease, but injury.”

The irony of The Body Keeps the Score is that a body-focused, science-based approach to mental health rejects the notion of a disease model of mental illness.  At first, that seemed a contradiction.  Then I realized that perhaps the right model for mental health disorders is not disease, but injury.

Injury in the form or trauma or undue stress may be enough to cause or trigger some disorders.  However, I use the term injury not just in the sense of causes, but effects.  Mental health disorders such as schizophrenia, depression, or anxiety may be caused in part by trauma, but they can also cause injury.  The injury from schizophrenia does not just occur to a person’s genes and brain chemistry.  It also affects one’s ability to work and earn a living, connect with others, have a valued purpose, and to think and be able to trust in the reality of one’s own perceptions.  In this respect, it is an injury to a person’s social, emotional, intellectual, occupational, financial, and spiritual well-being, as well as to the body.

To the extent that mental health problems are actual medical disorders, they are “whole person” illnesses.  You may have seen one of those anti-stigma Internet memes contrasting society’s low acceptance of mental health disorders with the sympathy and compassion accorded to someone with a broken leg.  While it’s true that schizophrenia is no less of a medical condition than a broken leg, there is a big difference between the two.

The problem with the broken leg analogy is that a leg is not a person or a life.  Mental health disorders affect the whole person, and every aspect of that person’s life.  That’s why Van der Kolk includes social conditions in his fundamental truths of trauma healing.  The physical illness analogy is just as misleading when we refer to schizophrenia and other mental health disorders as “brain-based diseases.”  The causes and effects are a lot more complicated than that.   Unlike broken legs, mental health disorders do not simply heal in response to a single course of treatment, such as medication.  It often takes a range of treatments, services, supports, and self-care for a process of recovery to begin.

Riff’s problem, expressed in the song “Gee, Officer Krupke,” is not that he is broken beyond all help. It’s that he is passed from one kind of expert to the next, each who sees him through the different lenses of their professions. No one puts the pieces together to see him as the whole person he really is or needs to be.

Van der Kolk writes that “the challenge of recovery is to reestablish ownership of your body and your mind – of your self.”  While he was mainly referring to people who experience posttraumatic stress disorder (PTSD), this definition of recovery is equally valid for anyone living with schizophrenia, bipolar disorder, depression, anxiety, or any other mental health disorder. By “self” he means the whole person and by “ownership” I believe he means a sense of feeling in control – of one’s own thoughts, emotions, and behavior, but also over the course of one’s own treatment and recovery.  This is where the medical model of mental illness so often fails.

West Side Story, though a tragedy, ends on a hopeful note.  “There’s a place for us …. Somehow, Some day, Somewhere!”  The somehow for people with trauma-influenced mental health disorders is very likely an approach like Bessel Van der Kolk’s, which recognizes and validates the complexity of the whole person within the whole environment.

Want to read The Body Keeps the Score? Check out the link below!

Your purchases will help support the costs of running rtor.org, a free service of Laurel House, Inc., 501 (C)(3), non-profit organization 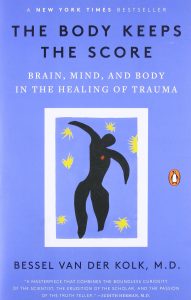 2 thoughts on “Is Mental Illness a Disease: A Trauma-based Look at Mental Health Disorders Through the Lens of West Side Story”