I’m Jo, artist, writer and Renaissance Soul with a potty sense of humor.

For over thirty years, I suffered from depression and anxiety, a result of my toxic upbringing followed by post-natal depression. It was a pain in my posterior because I really, really wanted to indulge in my creativity and the Renaissance Soul side of my life, but depression and anxiety prevented much of it. I’m often asked how creativity may have alleviated my depression, and did it play a role towards my recovery? No, it didn’t. So, while I would like to discuss the role these activities played in my miraculous recovery – because miraculous is what it was, and I’ll be talking about that later – they really didn’t, so I can’t! But I can relate how much creativity I managed to accomplish during those long periods of depression, and what I did to help keep me sane.

I’ve been an artist forever, but, sadly, that creativity suffered during my depression. I didn’t want to do anything artistic, despite having done a foundation art course after school, a three year illustration course before my kids were born and a correspondent art and design course when they were young. My grand plan had been to do freelance artwork but that didn’t happen. I was struggling with depression and I wasn’t organized and business-minded enough to do it.

But I did write. I’d started writing an epic Western novel when my first child, my daughter, was born. I’m a Wild West nut (Kitty Le Roy’s Wild West www.kitty-le-roy.co.uk), fascinated particularly by the roles played by the gun-totin’, cussin’, hard drinkin’ gals of the Old West. I wanted to not only portray them at living history camps with the help of my brilliant Husband/pard quack doctor Jack Coltrane, but to write a novel. Alias Jeannie Delaney is the life story of a devastating cowgirl who’s the fastest gun in the West and bisexual. The writing of it did help keep me sane during depression and young parenthood, although it has caused me a ton of angst over the years in my endeavors to get the story right – the way I want it and the story I would read.

After the birth of my daughter, I did a correspondence writing course. I’ve done one or two others since then, and thoroughly enjoyed them. I wrote a year’s supply of anecdotal articles for my local newspaper and have had several articles published nationally.

But my art didn’t get a look-in. I had an art space in our conservatory, which was great. A ton of light and a utility room to clean up in. I used it to create in sometimes, but my heart really wasn’t in it. I became depressed if I stayed there for too long. Oh, I so envied those artists who enjoyed their creative spaces.

But one thing I did do that helped during my depression was writing out my negative thoughts and feelings. Particularly when I couldn’t put the thought or feeling into words and explain to Husband, my supporter/carer, what was going on in my head. Perhaps I was just plain embarrassed, but putting pen/pencil to paper and handing it to him to read made all the difference. We would then talk the matter out. This was pre my Cognitive Behavioral Therapy days, but talking, discussing the problem nearly always lifted my mental load.

Meanwhile I had developed my Renaissance Soul habit, of which I’ve always been rather proud. I had taken up archery when my kids were young, but unfortunately, depression had put a lid on it. Obviously the Wild West is another fascination, and again, anxiety forced a halt to that. I adore travel. I’m fascinated by archaeology and ghosts. I go mud larking – digging up anything of interest on riverbeds or on the coast. I love architecture. I was brought up next to the River Thames (UK), so boating is another love. I’d regularly row the family dinghy as a teenager. Husband and I own a narrow boat moored in Warwickshire, and a traditional Canadian canoe. Science is another fascination – biology, medicine and space research.

Some Renaissance Souls worry that others will consider them ‘flaky’ or indecisive. I’ve never had that concern. I’m grateful I’m fascinated by so much. So I managed to indulge in many of these activities even when I didn’t feel good.

And now… about my miraculous recovery…

I’d been on antidepressants since the births of my children, and they had helped enormously. After twenty years their effect wore off, and I had also developed anxiety, so, five years ago, just before Christmas, my psychiatrist prescribed Prozac. He buzzed off on holiday and left us to it. On Christmas day I became suicidal. Husband’s family came to help but I grew worse over the next couple of days. Then the neighbors arrived.

One of them was a sweet young lady whose mother lived a spit away from us. She said to her mum: ‘Mum, didn’t you work for the mental health team?’

Daughter shot off for their business card. Husband rang them. The team ordered me off Prozac and my own doctor prescribed Quatiapine, an anti-psychotic. That really did help. Then, surprise, surprise, the team arranged an appointment for New Year’s Day. And that was the start of my complete recovery.

The whole process of virtually complete recovery took three to five years, to today. I have never felt like this before. First I was stabilized. Then my new psychiatrist prescribed a combination of a higher dose of Venlafaxine, my own antidepressant, and Mirtazapine. This combination is known in mental health quarters as California Rocket Fuel – I love the name! The combination was highly recommended by my nurse practitioner. I said: ‘I want! Gimme!’ Over time I grew calmer and lighter minded.

The next step was a course of Cognitive Behavioral Therapy. Scientifically-minded Husband was fabulous at helping me with this. The therapy takes negative, distorted thinking that’s developed over the years, takes it apart, rationalizes these thoughts, and straightens them out. The course took some months, but worked on me. I had the right attitude, apparently. I’m going to get better, by hook or by crook, so that I can do all those things that I’d always wanted to do!

Another problem came to light. That of my parents and siblings. For years, Husband had stated how badly I had been treated, verbally, over the years by them. Constant judgments and lectures. I was aware of this, but had defended them. ‘Just the way they were’. But I was forced to see the situation. I had always assumed that my depression had been down to chemical imbalances, but I soon learned, through the charity Mind that years of neglect and verbal abuse can result in a change in brain chemistry, causing depression.

A year after my medication crisis, my parents died within days of one another, and I suddenly felt freer than I’d ever felt before. Familial obligations vanished. My happiness factor had risen to such a point that nothing was going to ruin it! And that included my family. So I ‘divorced’ them. I was vaguely in touch with my older brother, but, although he claimed to be sympathetic, he still treated me as a ‘pesky little sister’ and I still received his sharp tongue. No longer. And around three years after making that major decision, and three years of the absence of negative treatment via my family, I’m better than I’ve ever been.

Today I’m reviving my creativity and building a sometimes adventurous life of friendships, interests and travel. I’m slowly editing my mammoth novel with Husband’s help, I’m hosting an art group in my home – I never used to like being at home at all. I’m returning to archery with a friend. We’re travelling, boating, investigating steampunk, and my Renaissance Soul life is gaining pace.

And, because I detest ageism, I’m aspiring to be a role model for people in their sixties. But, most of all I’m sharing my mental health experience to demonstrate that depression is one of the most treatable mental health issues. It’s ‘simply’ a case of finding the right treatment and the right people to give it. If only it was that simple. But it can be done. I’m the proof of that. 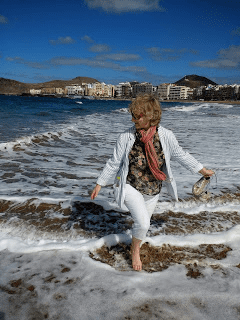 Author Bio: Jo Clutton is an artist and writer who loves to travel. She’s also a Renaissance Soul with a potty sense of humor, and is aspiring to be a bit of role model for her age group, the over-sixties, particularly since recovering completely from thirty years of depression and anxiety.

She’s now rebuilding her lifestyle and creativity and sharing her mental health experiences on her blog, Creating My Odyssey, to give other sufferers of depression and anxiety some hope, because depression is one of the most treatable of mental health issues.

Creating My Odyssey – Liberating the Real Me After Thirty Years Of Depression and Anxiety www.jo-b-creative.blogspot.co.uk
Facebook Jo Bennett
Twitter @Clutton_jo

Photo by Paulette Wooten on Unsplash