1. Feeling two emotions at once

Unfortunately, the hashtag #imbipolar often gets misused on Twitter by people who think experiencing more than one emotion at a time is the same thing as living with bipolar disorder. The tweet above is from a young woman who is both upset at her boyfriend and feels affection for him. This is not a sign of mental illness or bipolar disorder at all. Your brain can feel a wide variety of emotions at once and sometimes you can have conflicting feelings about important people in your life. It is possible to love someone but still feel upset or act badly towards that person. This would only be considered a warning sign of mental illness if the emotions she felt were so intense that they caused a drastic impact on her life and impaired her ability to function on a daily basis.

In this tweet, a young woman is wondering why her mood improved even though her night started out badly. Once again, people use #imsobipolar to equate any changes in mood to bipolar disorder. But, changing your mind or feeling better as the day goes on is not a sign of mental illness. If you think about it, it’s great that the human brain lets us change our minds as the situation around us changes. It wouldn’t be productive if we were stuck in the same mood or mind-set for a long period of time.
Severe and rapid changes in someone’s mood could be a sign of mental illness. Those with bipolar disorder experience periods of depressive lows and manic highs. The depression can be so severe that it can stop those with the disorder from leaving the house while mania can cause them to make dangerous decisions. Other disorders such as borderline personality disorder can involve extreme mood switches as well. To learn more about these disorders, visit our Bipolar Disorder page and Borderline Personality Disorder page. Keep in mind that changes in your mood over the course of a day or feeling ambivalent about your relationships shouldn’t be compared to having a serious mental health disorder.

3. Being forgetful once in a while 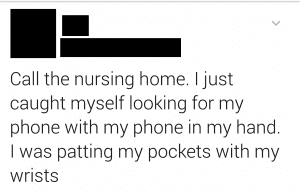 Under #Imlosingit, you’ll find dozen of tweets from people who think that if they have misplaced an item that there is something wrong with their brain. Similar to the tweet above, many recount stories of losing everyday objects like car keys or holding their smartphone while looking for it. But what they don’t know is that having small glitches in your memory is perfectly normal. Many don’t realize that while the human brain is extremely capable, it is far from perfect in the area of memory. Scientific studies have shown that human memory can often be unreliable. For example, there are many incidences where multiple witnesses to the same crime remember the getaway vehicle in a variety of different colors, makes, and models (Visualexpert.com). So, having minor hiccups in your memory is not a sign of mental illness or of a serious brain disorder like dementia.

Drastic change in your memory could be a sign of mental illness or of another type of disorder. If your poor memory is causing you difficulty in your work or home life, be sure to contact a medical professional.

Contrary to what the young woman in this tweet thinks, talking to yourself is not necessarily a sign of mental illness. In fact, the higher your IQ, the more likely you are to talk to yourself (sciencedaily.com). Since our modern human brains are usually abuzz with over-stimulation, it’s no surprise that we might find ourselves passively speaking our thoughts. That being said, there is a big difference between talking to yourself in this way and talking to yourself because you are speaking to someone who doesn’t exist. The latter is a sign of mental illness as many psychotic disorders, such as schizophrenia, involve an individual breaking from reality and sometimes hearing or seeing people who aren’t real. This a serious sign of mental illness, that should not be ignored. But don’t worry if you find yourself listing your to-do list or your everyday thoughts out-loud.

In the tweet above, this woman has mistaken her desire to clean her house as a form of obsessive compulsive disorder or OCD. In reality, it is perfectly logical and healthy to want to clean your house if someone who lives there has gotten sick. But I assume once this woman from the tweet above has finished her cleaning, she will return to her life and not continue to think about her cleaning. Someone with OCD may find himself bombarded with intrusive thoughts about germs and getting sick. He may also find that he can’t stop cleaning the same spot in his house over and over again. It may even get to the point that he will struggle to leave the house or keep a job for fear of germs or the constant desire to clean. Liking your house clean is not the same as having a serious mental health disorder that can greatly affect how a person functions.

OCD is also not just about cleanliness. Repetitive behaviors, rituals, arranging, and constant checking are also signs of OCD that don’t necessarily involve cleanliness. This woman in the tweet above believes her dislike of wearing certain colors is comparable to someone with OCD. Not liking to wear certain clothing items is not a sign of a mental illness or even an interesting trait. It is extremely normal. This woman from Twitter is not wearing those colors because she doesn’t like them. Someone with OCD might avoid wearing certain colors because he might have an obsessive thought that is telling him that if he wears purple his family will die. He isn’t being quirky, funny, or picky. At the bottom, you can see a tweet by a different woman on Twitter who is discussing her real OCD and how on its worst days has sent her to the hospital. Calling your personal style choices “OCD” ignores the pain of those who live with the disorder. But if you are experiencing possible symptoms of OCD, don’t hesitate to get help.

If you or someone you know is showing signs of a possible mental health issue, it is important to seek help from a qualified professional. Our Resource Specialist can help you find expert mental health resources to recover in your community. Contact us now for more information on this free service to our users.