Apparently this little guy really loves the song “Let It Go” from the Disney animated feature Frozen. “Let It Go” won the Academy Award for Best Original Song and quickly became one of the best loved Disney songs of all time. Columnist Yvonne Abraham called it “musical crack” which “sends kids into altered states” as we can see in the video above.

As I pointed out in Part I of this series (“Does Princess Elsa Have Borderline Personality Disorder?”), Elsa, the character who sings the song, appears to have a problem with emotional dysregulation. According to the songwriter, Kristen Anderson-Lopez, the popular singer Demi Lovato was chosen to record the radio single version of the song partly because of her own struggles with mental health. Lovato, who is open about living with bipolar disorder, has stated that the story is so relatable because “Elsa is finding her identity; she’s growing into who she is and she’s finally accepting her own strength and magical powers. Instead of hiding it, like she’s done all her life, she’s letting it go and embracing it.”

Many people see this scene as Elsa’s moment of triumph – an overcoming of the restrictive rules of society and the limitations they impose on her natural gift. Marc Snetiker of Entertainment Weekly hailed it as “an incredible anthem of liberation.”

In the first verse she sings “Conceal, don’t feel, don’t let them know,” words her father spoke as he handed her a pair of gloves to hide the effects of her frozen touch. “But now they know!” she ends the verse, casting aside the hated gloves as she launches into the rousing chorus: “Let it go! Let it go! I don’t care! I don’t care what they’re going to say. Let the storm rage on.”

Yes, this is liberating. But is it healthy?

In Part I of the Frozen series, I suggested that Elsa experiences something like borderline personality disorder (BPD). In this interpretation, Elsa’s frozen rages are an outward display of the emotional dysregulation she feels inside. During the “Let It Go” scene we see her gain control of her terrifying “gift” as she throws away the gloves to build a magic castle made of ice. 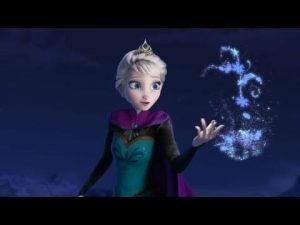 “Let it go! Let it go! That perfect girl is gone! … And the fears that once controlled me can’t get to me at all!” Elsa displays the kind of self-acceptance that is the cornerstone of Dialectical Behavior Therapy, a recommend treatment for BPD. The discarding of her gloves is a powerful declaration of personal freedom. So is the tossing of her crown. But on another level it’s an abdication of responsibility, literal and emotional.

“I’m never going back, the past is in the past!” The principles of mindfulness, another cornerstone of Dialectical Behavior Therapy, tell us that it’s good to live in the present moment and not allow the past to determine our thoughts about the future. But Elsa’s statement feels more like a denial of the past than acceptance of it. The song concludes with the line “The cold never bothered me anyway,” as Elsa slams the door, closing herself off from the rest of the world in a self-imposed Arctic exile. That’s an odd way to end an “anthem of liberation.”

This is Elsa’s big scene. So some people are surprised to learn that it occurs at only a third of the way through the movie. Far from being free from the inner chaos of her emotional dysregulation, she is now more than ever its prisoner. But with the declaration to “Let it go!” she has taken an important first step in accepting who she is.

In terms of her growth as a character, Elsa is still at the beginning of a journey to achieve emotional balance and connection to others. The main action of the movie will be about her struggle with the inner demons of a fiery temper and frozen heart, and the parallel story of her younger sister Anna, who is dealing with her own issues of insecure relationships.

Frozen features some of the most engaging numbers in the Disney songbook. Not just the powerhouse “Let It Go,” but the ominous “Beware the Frozen Heart,” the touching “Do You Want to Build a Snowman?” the naively hopeful “For the First Time in Forever,” and the comic “He’s a Bit of a Fixer Upper.”

All of these songs reinforce the theme of Frozen: seek acceptance not from others, but from yourself. When listened to from this perspective, each song has something to tell us about emotional regulation, interpersonal boundaries and the simultaneous longing and fear of connecting with others.

Curious as to how a Disney song ends up being “musical crack” for kids? This article explains the addictive appeal of “Let It Go”, 5 Reasons Why Frozen’s Let It Go is So Addictive.
Does Princess Elsa Have Borderline Personality Disorder: Part I

To read the full lyrics of “Let It Go”, click here.

Want to see the movie? Check out the link below!
Your purchases will help support the costs of running rtor.org, a free service of Laurel House, Inc., 501 (C)(3), non-profit organization.