A few weeks ago while my wife was sorting through memorabilia from our early parenting years she found a picture my son, the budding artist, drew of his beloved father. 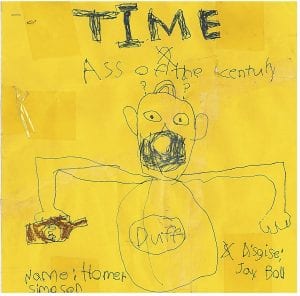 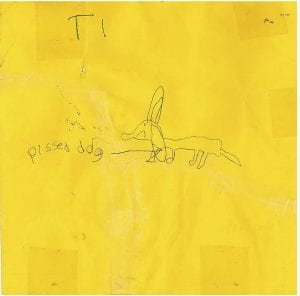 That’s right, it’s a drawing of “Ass of the Century” Homer Simpson, AKA Jay Boll in “disgise”, on the cover of Time.

I’m not sure what I did to merit the Time magazine cover treatment, but my guess is it had something to do with a time-out or other abuse of parental authority. The reverse side of the paper has a picture of a cartoon animal with the caption “pissed dog,” which is perhaps an indication of the artist’s state of mind at the moment of creation.

I never even watched The Simpson’s, but after a few hours of research on the Internet I figured out that it’s not a compliment to be compared to Homer Simpson by one of your children.

Let’s face it, being a father at this particular point in history isn’t easy. We no longer enjoy the automatic respect and obedience our fathers and grandfathers once commanded. Sometimes I think Father’s Day has become a special occasion to recognize on one day out of 365 that with all the stuff we failed at and got wrong, maybe, just possibly, we do something right once in a while.

As the Time magazine cover illustrates, I may not be the world’s best authority on parenting. But with Father’s Day around the corner, I thought it might be fun to share 10 How-Not-To Parent Tips I learned from Homer Simpson and an extra bonus tip for DIY dads who like to putter on the weekend.

As always when I write for my blog The Family Side, I do so as the parent of a child with mental health concerns. Raising such a child has its own special rewards and challenges. But Homer Simpson is such a good example of bad parenting that all parents should be able to enjoy and benefit from these tips…

Take Care of Your Own Mental Health – Ever hear the expression, “Put on your own oxygen mask first”? While Homer Simpson seemed to have had no trouble putting his own needs before his wife’s and children’s, many parents of a child with serious mental health challenges end up taking the opposite approach. What you need is a balance between the two extremes. Dealing with a mental health problem in the family is stressful for everybody. Parents need to take care of their own mental health before they can effectively help their children.

Get the Best Help Available – Don’t do what Homer did in The Simpsons episode “There’s No Disgrace Like Home” and sign everybody up for “family shock therapy.” The quack doctor offers a form of “aversion” therapy based on the advice that “When someone hurts you emotionally, you hurt them physically.” Unfortunately, some real-world approaches are almost as bad. When someone you love has a mental health problem you want to find the best professional help available. Our Directory of Family-Endorsed Providers is a good place to start if you’re looking for reputable mental health professionals that have been recommended by other families and vetted by our Advisory Group of professionals and family members.

Be an AWACS, Not a Helicopter – When your child has serious mental health issues you may be tempted to become a helicopter parent, like Homer in the 2009 episode “Father Knows Worst.” Of course you need to look out for your child, but the aircraft you should model is not a low-flying helicopter. Be an AWACS instead, an Airborne Early Warning and Control System that operates at high altitudes and uses sophisticated radar technology to detect trouble early and direct a swift response. The key to being an AWACS parent is to maintain vigilance from a distance, swooping in to intervene only when your child really needs it. 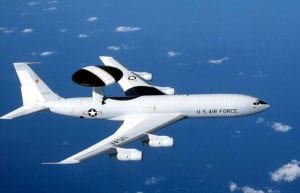 Listen to Your Child – In the 2002 episode “Jaws Wired Shut” Homer had to have his mouth wired shut for a broken jaw in order to really listen to the members of his family. You can do better than that. Many childhood mental health problems lie beneath the surface. Chances are that you will not understand the problem or know how to help unless you take the time to listen to your child.

It’s O.K. to Set Limits – Tired of Marge’s uptight attitude, Homer convinces her to seek advice from a self-help guru in the episode “Bart’s Inner Child.” The pop psychologist tells her that everyone should follow Bart’s “spontaneous” (i.e., impulsive) approach to life, with disastrous consequences for the town of Springfield. Having a mental health disorder does not exempt a child from having to follow rules and meet parents’ expectations. All children need structure and clear expectations as much as understanding and support.

It Helps to Have a Bag of Tricks – Homer Simpson is famous for having said “Yeah, strangling. It’s not the only tool in my parenting arsenal, but it’s the sharpest” (“Love Is a Many Strangled Thing“). While strangling your kids is frowned upon in most cultures, every father needs a bag of tricks he can reach for when kids experience debilitating symptoms of depression or anxiety. An emergency clown nose is the sharpest tool in mine. You’d be amazed at how many potential crises in our household have been averted with this silly dad device. 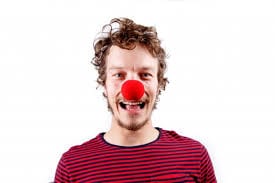 Celebrate Your Victories – It must feel great to be the parent of the kid who’s having a hard time choosing between the lacrosse scholarship at Yale and math scholarship at MIT. But some of us are happy for our kids just to make it through another day of classes. It’s like the episode which ends with Bart proudly displaying his latest exam results on the refrigerator (“Bart Gets an F“). OK, so he didn’t get an A. But the D- he received is an improvement over all the F’s that came before. When you have a child who really struggles in school, home and social life, you need to acknowledge every gain you can. 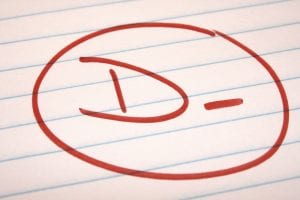 Offer Love and Reassurance – Often. Don’t be like the doltish dad of the 2001 episode “Homr,” in which it takes a surgically-induced jump in IQ points for him to acknowledge his love for daughter Lisa. All kids need love, affection and support. Kids with mental health issues don’t need those things any more than other kids do. They just need them in a way that is unmistakably obvious, so their illness doesn’t cloud the picture.

Don’t Play Favorites – Homer recently revealed his true colors during a live tweeting when a fan asked who his favorite child was. Knowing that a good father doesn’t play favorites, he astutely replied, “Don’t make me choose among my babies. But not Bart, for sure.” While it’s true that the child with a mental health problem may need extra reassurance and attention, the additional effort from parents can look a lot like favoritism to other children in the family. Brothers and sisters can be powerfully affected by a sibling’s mental health problems. It’s important to recognize that they will also need extra attention and reassurance.

Never Give Up – “Kids, you tried your best and you failed miserably. The lesson is never try”… More bad parental advice from Homer in the episode “Burn’s Heir.” Raising a child with serious mental health issues is one of the hardest things a parent can do. But remember it’s even harder for your child. You can be a role model to your child by never giving up and always having hope.

And my final how-not-to parent tip…

To all the dads out there, count your blessings that “Ass of the Century” is award only once every hundred years, and this century’s slot is already taken.

As for me, this Father’s Day I’ll be taking solace in the fact that even Homer Simpson was not a complete failure as a parent. In the 2001 episode “The Parent Rap” Bart pleads for the evil Judge Harm to show leniency to his parents whom she blames for Bart’s delinquency: “Your Honor, it’s not easy being my parents. I’m always screwing up in school and getting in trouble with the law. But if I grow up to be a halfway-decent person, I know it’ll be because of my mom and dad. Everyone else might give up on me, but my parents never will.”

Do you have a favorite bad parenting moment from The Simpsons? Or maybe you’ve made some of your own “Homer” mistakes as a parent. Please share your how-not-to tips or thoughts in the Comments section below.

One thought on “How-Not-To Parent Lessons from Homer Simpson: 10 Episodes of The Simpsons I Wish I’d Watched Before I Became a Father”