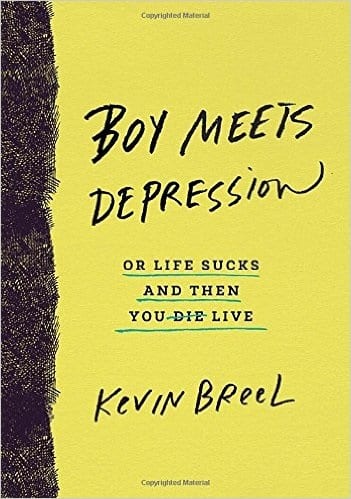 In May of 2013 a Canadian comic named Kevin Breel gave an 11-minute TEDx Talk that went instantly viral with more than 3 million views to date.  Two big things about the speech “Confessions of a Depressed Comic” account for its success: the speaker’s age and the message he delivered.

Kevin might downplay the significance of age. But the world had never seen a 19-year old speak on a topic as heavy as suicidal depression with such passion, poise, intelligence and self-awareness. His eloquence and youth make the second big thing, his message, all the more rousing. That a young, good-looking, apparently happy kid from the suburbs could have faced a near daily struggle with depression and the urge to kill himself was startling to many viewers. That was the point.  He didn’t look depressed.

Nothing drives home the message that mental health disorders can affect anyone better than seeing Kevin Breel up on stage talking about his personal struggles. Now he has written a book, released last month, which tells the same story, but with greater depth and different lessons.

Kevin’s book Boy Meets Depression (Or Life Sucks and Then You Live) contains some of the most eloquent and powerful descriptions of depression written since Andrew Solomon’s The Noonday Demon: An Anatomy of Depression. It is also a deeply personal account.

The 2013 TEDx Talk was mostly a call to action: Kevin challenging us to cast aside our misconceptions about depression to form a better understanding of the people who experience it.  If the TEDx Talk was an appeal to society, Boy Meets Depression is more like an individual user’s guide to surviving depression – whether we live with depression ourselves, love and live with someone else who has it, or just plain live as human beings. There is even a “Notes to Self” section at the end of each chapter which summarizes personal lessons learned at each stage of Kevin’s life.  Some are funny: “Therapy is kind of like the first time you have sex, minus all the stuff that makes sex cool.”  Others get right to the point: “When you feel f***ed up: Stop. Breathe. Talk to Someone.”

As a writer, I was especially drawn to the theme of storytelling in Kevin’s life. In the TEDx Talk he mentions his near brush with suicide.  One night at the age of 17, worn down by his depression, he decided to end his life. He set about writing a letter to his mother and sister explaining his decision and apologizing for the impact it would have on them.

Putting those words on the page… is unquestionably the very thing that saved it.  For the first time, all this stuff wasn’t just somewhere inside of me.  It was out.  And it hit me right then that this piece of a paper was just a story.”

Writing the letter may have been what saved his life, but it’s not what made him whole again.  That took another kind of story, which he describes in the next to the last chapter of the book.  There he writes of finding his “own subplot in the much bigger story of life.”  Kevin starts to get better when he realizes “You are not the big story.  Life is the big story.”

The final chapter of the book is titled “Thinking Better Thoughts” and it touches on how the way we think about ourselves, our feelings and our thoughts impacts our mental health. Earlier in the book he gives an example of the twisted logic of depression which leads him to the conclusion that eating is pointless because even after preparing and devouring the most delicious meal in the world, he will be hungry again in another five hours and still be left with all the dirty dishes.

This kind of negative thinking (known in cognitive behavior therapy as “cognitive distortion”) is common with depression.  The problem Kevin describes is that even when a person is aware that this is happening, “you probably no longer have the optimism required to create a change in your life.” He describes the suicide experience as his “reaching bottom” moment.  In that moment he found what he describes as an “invitation” – the opportunity to look at his depression as something inside him, rather than a world of pain and fear that he would always be a part of. Passages like this one reach beyond the merely autobiographical to emotional and literary truth.

I felt that, too, in his musings on story as a metaphor for life. Kevin Breel is a gifted storyteller, as anyone can see from his viral TEDx Talk.  The suicide letter he writes and never acts on is another kind of story. As I read the final pages of Boy Meets Depression I wondered if the letter was in some ways symbolic of a killing of his ego which allowed Kevin the person to go on living. It is a new Kevin with new found maturity, “thinking better thoughts,” who declares at the end of the book that ‘you are not the story, life is the story.’

To purchase the books mentioned in this article click the links below:

Boy Meets Depression: Or Life Sucks and Then You Live

The Noonday Demon: An Atlas of Depression