If stories have the power to heal, then stories about mental illness have the potential to heal at the most fundamental level, touching on our sense of self and how we experience our lives.  We often think of illness in terms of its impact on the body.  But illness also affects the mind, and in the case of so-called “mental illness” the impact can be devastating, as a new book on the subject illustrates.

Parts Unbound is packaged as a collection of 18 personal “Narratives of Mental Illness & Health.” Each story offers a window into the lives of people affected my mental illness. In this collection the reader will meet: the mother of a young child who fails to receive the acceptance and support she needs from her husband; a woman who can’t get appropriate treatment for her depression because “the system is as broken as the neurons in the brains” of those it seeks to help; residents of a “state subsidized group home for schizophrenics” who seem to just exist without getting better.

These stories may seem bleak but they are real and from the heart.

Initially, Parts Unbound seemed to be just that: a collection of mismatched parts that come unglued and fall their separate ways.  In many of the accounts family members and mental health professionals are just as often part of the problem as they are sources of support and healing.  Some stories end on a hopeful note, while others are despairing.  In many cases the authors have found a way to cope and move forward in their lives.  Others seem defeated by the magnitude of their problems and the inability of various systems of care to meet their needs.

Although the individual stories were compelling, many of them lacked the neat moral lesson I was looking for – until I realized the moral was in the act of telling.  Editor Ginny Levy writes in the introduction that “stories are transformative, that allowing my brain to absorb another’s ideas and experiences will inevitably reshape my own way of thinking … reading others’ strengths and determination will bring resilience and trust into my own life.”  It wasn’t until I finished the book and went back to the beginning that I recognized the truth of that. 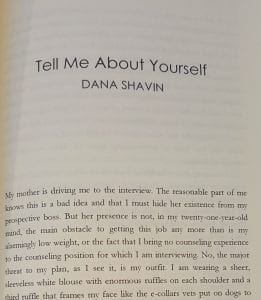 The stories of Parts Unbound have a message after all, and the glue that holds them together is recovery.  Not necessarily recovery in the sense of a cure, but in finding a way to live with one’s disorder and share one’s experience.  The telling of these stories is itself transformative despite, or maybe even because of, the bleakness of the subject matter.

In all but a few cases the person telling the story writes from first-hand experience.  The book’s Editor, Ginny Levy, has ensured that all major mental health disorders are covered: not just anxiety, depression, bipolar disorder and schizophrenia, but addiction, OCD, PTSD, anorexia, autism spectrum disorders, dissociative identity disorder and borderline personality disorder.  Many of the accounts are about living with multiple disorders.

Three of the stories in the collection stand out as particularly good examples of how recovery can be an active choice in life:

“Tell Me About Yourself” by Dana Shavin, is the account of a young woman with an eating disorder viewed through the lens of a job interview.  I won’t reveal the final outcome, but during the interviewing process it becomes clear that her recovery is far from complete.  Dana’s story is exceptionally well written, with vivid details that bring to life her constant struggle to manage her condition.  It illustrates the point that for many people living with mental health conditions recovery is a process involving active choices rather than a state of being.

“Choosing to Live” by Jennifer Robinson tells the story of a woman who consciously struggles with an eating disorder, cutting and suicidal impulses for years before realizing that she has also been experiencing the delusions and hallucinations of schizoaffective disorder.  After a near brush with suicide, she is forcibly brought to a hospital emergency room and told she has a psychotic disorder. Once she is given the right medication and understands that her delusions are not grounded in reality, she begins to put her life together. In the aftermath, she repairs damaged relationships with family members, gets involved with a local chapter of the National Alliance on Mental Illness, writes for her own blog, suicidalnomore.com, returns to college and is set to graduate in December 2015. Jennifer’s story is noteworthy for the example she sets for others living with serious mental illness and for the tips she offers on coping with her illness.

“No One Will Hurt You Here” by Catherine Klatzker is about a woman with dissociative identity disorder who experiences multiple identities, or her “many Parts” as she calls them.  Her narrative is a good example of how therapy and supportive relationships can aid recovery.  It opens with a harrowing account of a self-cutting episode and moves to the safety of a therapeutic relationship where healing begins.  In time she comes to identify and begin a dialogue between the many Parts and her “central observing ego … the Part that observes and is aware of everything.”  By the end of the narrative she begins to feel that the “PTSD and trauma-related Parts … no longer take over my life without my knowledge.”

There are many other touching and inspiring stories in Parts Unbound.  Many of the authors are accomplished writers with impressive publishing credits.  All of them tell their stories with an immediacy and authenticity that makes this collection valuable reading for anyone with an interest in mental health and recovery.

Your purchases of this item on Amazon.com will help support the costs of running rtor.org, a free service of Laurel House, Inc., 501 (C)(3), non-profit organization.

One thought on ““Parts Unbound”: Many Voices on Mental Illness Come Together in a Single Volume”